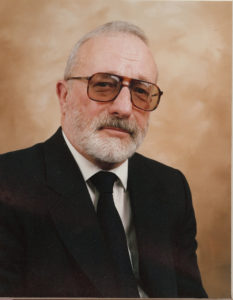 Bob began his wrestling career at Chicago Hirsch High School, where he placed 3rd in the Sate two different times.

Upon graduation from High School, Bob entered the Air Force and upon completion of his enlistment, enrolled at Southern Illinois at Carbondale, where he wrestled for Ha11 of Famer Jim Wilkenson.

Upon graduation from SIU, Bob began coaching and teaching English at Granite City High School, a position he held from 1956 to 1968. He coached the lower levels for Hall of Famer Jill Schmitt. It was from this background that he began officiating. He officiated numerous duals, Regionals, Sectionals and Officiated at 7 State Final Championships.

Bob left Granite City for a short time to start a program at Florrisant Valley Community College where he stayed for 4 years, developing 4 All-Americans. When they discontinued wrestling, Bob came back to Granite City to help Walt Whitaker who had just taken the job at the New school Granite City North, he stayed there until his wife who was a hospital administrator was transferred to Michigan, where he coached in the Upper Peninsula. It was here that Pat won two Upper P State Titles. From Michigan they went to Brainerd, Minnesota, where Bob was the Head Coach of the State Championship Team and Pat won a Title here. Then it was on to Florida, where Bob again was a coach and youngest son Matt won a State Title. One year later Bob and his wife were transferred to England, where Bob began working; for the Government as AD and Head Wrestling Coach for Lindenheath Air Force Base, where he is presently employed. At this time, his teams have won 10 Straight Championships and he has had 13 European individual champions. He is also a technical advisor to the Scotland National Team. He has never lost a dual, while in England – 10 years.

Bob’s 4 Sons have won State Championships in 4 States – Illinois; Michigan, Minnesota and Florida – I doubt that this has happened to anyone else.