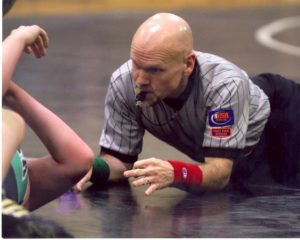 Ron Coit attended Normal Community High School. He wrestled three years on the varsity squad with a career record of 85-15-2. He was a three-time Capital Conference Champion, graduating in 1977.

Upon graduation from high school, Ron went directly to the drafting/engineering department for the Eureka Company, now Electrolux Home Care Products. He has been with this company for over thirty-three years.

Ron began officiating in 1980. He worked as an official at his first IHSA Regional Tournament in 1988. He has worked the IHSA Dual Team State Championships five times and the IHSA Individual State Championships eight times. In 2004 he was the first official to receive The George Girardi Award for his dedication to wrestling at the Normal U-High George Giradi Invitational. He has worked Cross State Classic and the Illinois/Indiana Classic duals several times. Ron was named Official of the Year by the IWCOA in 2006 and was nominated as Official of the Year on several other occasions. In 2009, he received the IHSA 30 Year Service Award.