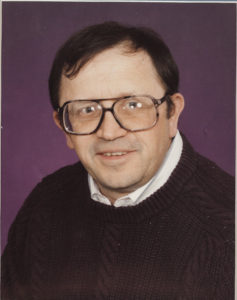 Ron is from Waverly, Illinois. This school did not have Wrestling in its program.

Ron’s collegiate days were at Western Illinois University, where he lettered 3 years in Wrestling.

His Teaching and Coaching career began at Mt. Olive High School, and he is Athletic Director, has been from 1967 to present date. He has been Mt. Oliver’s only Wrestling Coach – this being his 26th year.

In this time His Teams have had a 262-177-4 dual record; Won 4 Regional Team Championships, one Team reached the final 8.

He has had 40 State Qualifiers; 10 place winners and 4 Champions. He had the pleasure of having his own son qualify twice. One of his Wrestlers was the IWCOA Scholastic Wrestler of the Year.

Ron was nominated for Coach of the Year by the IWCOA in 1988.

Ron served on the IHSA Wrestling Advisory Committee from 1982-85 during the formation of the first team State tournament concept.