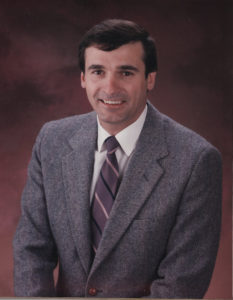 He started his collegiate days at the University of Illinois, but transferred to Eastern Illinois University. His Collegiate accomplishment have him losing only 1 dual match in 3 years; Winning the Illinois Inter Collegiate Athletic Conference Championship 3 times; and Placing 3rd in the NCAA Division II Championships

His Collegiate Record was 42-5 and included being Captain. He also placed in the Illinois Open and 3 times in the AAU.

He started coaching at Tinley Park and while there his team was twice Conference Champions. His 1970 team Hon the Regional and Sectional and Placed 3rd in the State. His dual record while at Tinley Park was 35-15. His individuals had 9 State Qualifiers, with 8 of them placing, with two being Championships. He moved on to Dixon High School where coached 11 years winning 126. Dixon had 1 Conference Championship; two Regionals and two Second Place finishes in Sectionals. He had 18 Wrestlers Qualify for State with 8 of them placing, 2 of them undefeated State Champions. 3 of his ·wrestlers would earn High School All American Awards.

Ron began officiating high school and collegiate meets in 1965 in Central Illinois. Coaching interfered with this, but in 1981 he resumed this part of Wrestling. He has officiated 13 Regionals; 8 Sectionals; 3 State Dual Championships and l State Individual Championship.

In 1989, Eastern Illinois University Elected Him to their Hs.11 of Fame