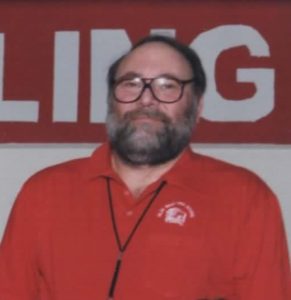 Ron is from Roosevelt High School in Chicago which did not have wrestling. He first attended Wright Junior College, where he began to be involved in wrestling later going onto Northern Illinois University.

He began his teaching and coaching career at Gemini Junior High School in Niles. He started wrestling here, later moving onto Apollo Junior High School where he again started the program. It was from here that the present IKWF Kids State Tournament Series was launched, started by Ron in 1970. Ron was probably the most influential person involved in starting this series which continues to this day. Starting from this point in time, Ron was elected President of IKWF a post he held for 6 years. At that time it was called the 14 and under program. When this program was begun, Ken Kraft a Hall of Famer was developing the Open for Out of High School and Hall of Famer Ted DeRouse was developing the High School Program.

It was during this time that Ron developed and ran a boys camp in Minocqua, Wisconsin which he ran for 20 years.

He moved from Apollo Junior High School to Oakton Junior College for 4 years where he had qualifier to the Junior Nationals.

He moved from Oakton Junior College to Maine North as their head coach a post he held until the school was closed 4 years. He had a state qualifier at this school. When Maine North closed, he moved back to Gemini as their coach until three years ago when he moved back into the High School Ranks as an Assistant at Niles West for 1 year and for the past 2 years as an assistant at New Trier. He has been involved with wrestling for a continuous 28 years.

For the past 4 years, Ron has been the Assistant Greco Roman Coach to the Illinois Wrestling Federation Junior National Team.