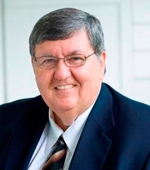 Ron Wrestled for Hall of Famer Ed Ewoldt at Wheaton Central High School, where he was an UpState Eight Champion and a Regional Place winner.

Ron did not attend College. He opted for the Culinary Business, working various venues which included: Perkins Pancakes; Kentucky Fried Chicken; Gino’s; Bob’s Big Boy; Shoney’s and Morrison’s. In 1972 he joined up with General Mills Restaurants as a Manager and progressed up the corporate ladder to Executive Vice President. During this time Ron developed an industry-wide reputation for leading the growth of the Red Lobster and the Olive Gardens. When General Mills created the independent restaurant division known as Darden Hospitality, Ron became its Vice Chairman. Ron left General Mills to become the CEO of the Cracker Barrel Old Country Store, Inc. He is President and CEO of CBRL, Group, Inc. a Tennessee corporation recently formed to be the holding company for Cracker Barrel Old Country Store, Inc.; Carmine’s Gourmet Market Logan’s Road House; and other companies that will be acquired in the future.

He has been the recipient of the Golden Chain Operator Award of 1991 by the Nation’s Restaurant News; The IFMA Food Service Operator of the Year for l993 and the prestigious Gold Plate Award from the International Food Service Manufacturer’s Association (IFMA).

Ron is currently the Vice Chairman of the National Restaurant Association and is in line to become Chairman May of 1999. He is .also on the board for the NRA Education Foundation; ‘Trustee of the culinary Institute of America; Trustee of Buena Vista University in Iowa and serves on boards of the Business School at the University of Mississippi and the School of’ Hotel, Restaurant and Institutional Management at the University of Delaware. He is and has been a speaker at numerous Food service and Business departments from Coast to Coast.

In wrestling – Ron has developed and promoted a 20 Team Division III, Dual Meet Tournament in Florida, which 3-4 Illinois Teams attend, followed by an Individual Open Tournament. He has also been instrumental in the startup of a new program at Cumberland University in Lebanon, Tennessee, which will compete in the NAIA.

He has been a Friend of Wrestling in Illinois 10 different times.

He has established a scholarship in the name of his high school wrestling coach at the University of Northern Iowa. He has also established the Ronald and Elizabeth Magruder Endowed Scholarship for two-year and four-year students as well as two continuing education scholarships for faculty at the Culinary Institute of America.