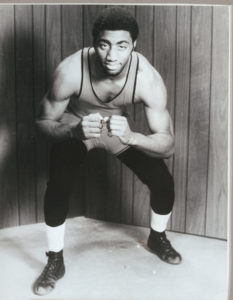 Ron is from Orr High School in the City, where he placed 5th in the State Championships. His next move was to Wilbur Wright Junior College in Chicago. While at Wright he was the National Junior College Champion in 1972 and in 1973. He was voted the Outstanding Wrestler in 1973. He also was selected for the East-West Junior College All Star Meet in 1973 bout that he won.

From Wright be matriculated at Oklahoma State University in Stillwater, Oklahoma, a then and still powerful Wrestling school. While at OBU he was a Big 8 Runner Up and 6th Place finisher in the NCAA Division I National Tournament in 1974. In 1975 as a Co-Captain of’ the Team, he won the Big 8 Championships and then won the National Collegiate Championship. He was voted the Outstanding Wrestler in the 1975 Big 8 Tournament and in 1975 he was voted the Outstanding Athlete at OSU.

During this time he was a 4 Time Place winner at the Midlands. In 1977 he began his coaching career at Bloom Trail High School – Since that time he has won 99 dual meets; Won 4 Conference Titles; 5 Regional Championships; 3 Sectionals and Won the State Championship in 1982. He has had 8 State Place winners – 2 of which were State Champions. He was voted SICA Coach of the Year 3 Times. He was named IWCOA Coach of the Year in 1982 and that same Year he was inducted into the National Junie Colleges Hall of Fame.

Ron still stays active in the summer helping out with the Various Illinois Wrestling Federation Activities, including coaching the Summer Team and participating as a Clinician.