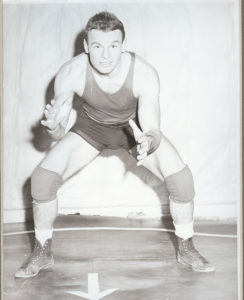 Placed Second in State. Entered college at the age of 28 after serving in the Army. As a Freshman for Northern Illinois University, he placed 2nd in the NAIA. He later placed Second again, won One NAIA Championship and won the NCAA Championship. He was also a Four-Time Interstate Intercollegiate Conference Champion in four different weight classes. Extremely active in Youth Wrestling Programs, Kids Grand Marshall in 1984, Grand Marshall in 1989, NIU Hall of Fame. Roy won the Midlands Championship in 1963 at the age of 31.