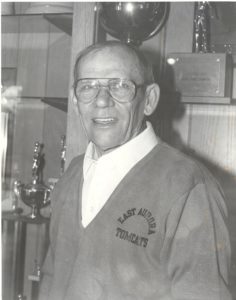 Roy started his career at Belleville High School, where he wrestled for Hall of Famer Walter Routh.

His collegiate wrestling career was at Southern Illinois University in Carbondale, where he wrestled for Hall of Famer Jim Wilkinson. His college career was interrupted by service in the United States Navy. After his service in the Navy was over, Roy came back to Southern and completed his degree.

His coaching career began upon graduation from SIU, as he stayed there for 1 year as a graduate assistant for Bob Franz, who had taken over for Jim Wilkinson who was on leave. Upon receiving his Master’s Degree, Roy headed north for East Aurora in 1958, where he started his coaching career in High School as a Diving coach for the swimming team (his summer activities assure him of this job). He took over the Head Wrestling position in 1959, a positional he held until 1975, when health problems forced him to retire from strenuous activities.

During his coaching career at East Aurora, his teams has a dual meet record of 176-73-4, the won 32 team titles, including regionals and 2 UpState Eight Conference Titles, as a team they had two undefeated seasons going 15-0 in 1962-63 and 15-0 in 1970-71. In 1964, the finished 3rd in the State and in 1971 they finished 4th in the state. Roy coached a total of 10 State Place winners, one of which was a Champion. At one time Roy had 24 East Aurora Wrestlers coaching throughout the State.