Like many before him, Ruben Villarreal grew up with wrestling in his family and followed his brothers in the sport.  He began his career in Plano’s Lil’ Reaper Wrestling Club at the age of six years old.  He then joined the Fox Valley Wrestling Club.  He was a two-time IKWF State Champion and a four-time place-winner.

Ruben wrestled four years at Plano High School for Steve Long and then his senior year brother, Jose Villarreal.  He was a three-time State Champion and place 3rd as a junior.  He had a career record of 154-2.  He was a nominee for IWCOA Wrestler of the Year in 2003.

Moving into the coaching ranks, Ruben coached at Somonauk Wrestling Club for 4 years, Lil’ Reaper Wrestling Club for six years and currently is an assistant at Plano High School.  He was a nominee for IWCOA Assistant Coach of the Year in 2019.

He was inducted into the Plano High School Sports Hall of Fame in 2010.

Ruben currently works for S & K Excavating and is a Union 582 member.

He enjoys coaching his sons through IKWF and coaching high school.  Ruben is also a car hobbyist. 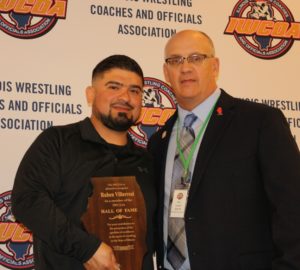