Russ got his start in wrestling in 6th grade PE class at Tremont Jr. High School. Because Tremont Jr. High had no wrestling at that time, high school wrestling coach Dale Schaidle would come in and run a camp after the PE wrestling unit and give kids opportunities to participate in open tournaments which provided Russ’s first experiences in wrestling.

Russ wrestled for Dale Schaidle at Tremont High School and placed 4th in state at 167 lbs in 1984 while taking home the state championship at 167 lbs. in 1985 and finishing with a 98-21 career record.

After college Russ started his coaching career as an assistant at Cahokia HS for the 1990-91 season and also served as an assistant again during the 1992-93 season. Russ took over the head coaching position at Triad H.S. in Troy for the 1993-94 season and has remained as head coach at Triad for the last 29 seasons. At the end of the 2021 season, his teams at Triad had compiled a dual meet record of 418-287-3, qualified 66 individuals for the IHSA State Tournament of which 22 earned all-state honors. His teams have also qualified for the IHSA Dual Meet State Finals 5 times and placed 4th in both 2009 and 2019. Russ has also been a 3-time nominee for the IWCOA AA/2A Coach of the year.

Russ feels very fortunate to have had a great support system around him throughout his wrestling career. He would especially like to thank his parents Jerry & Ann for their support throughout all of his wrestling endeavors. Another special thanks go out to former Triad H.S. A.D. Ted Cange for taking a chance by hiring him and giving him an opportunity to pursue a lifelong ambition. Lastly, Russ would like to thank his wife Beth and his kids Lexi and Cole for their support and involvement in the Triad Wrestling program.  Russ will never forget all the great relationships that were formed with his past teammates, coaches, wrestlers, and parents. The sport of wrestling has afforded him many opportunities he never would have thought of ever experiencing. 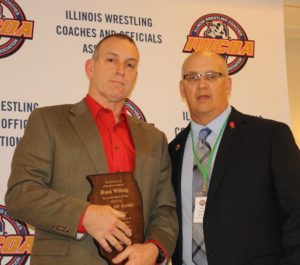