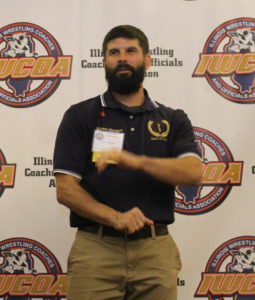 Ryan was born on August 15, 1980 in Danville, Illinois. The great outdoors, participating in sports, and family were the most influential parts of his life.

Ryan first started wrestling in the seventh grade after being cut from basketball tryouts at the Mahomet-Seymour Jr High. That first year was a tough one but with some immediate success and the knowledge gained that hard work and dedication pays off, he was hooked on the sport for life. Ryan was a two-time finalist in the IESA, winning the state title as an eighth grader.

In high school Ryan was a four-time place winner, winning titles in both his junior and senior years. The rich wrestling tradition, fantastic coaches Rob Porter and Steve Combs, and support from the Mahomet-Seymour community and his family, solidified his love for wrestling. During the offseason Ryan was heavily involved in Greco-Roman and Freestyle. He represented the state of Illinois at the national tournament in Fargo, ND starting his freshman year in high school where he placed sixth in Cadet Freestyle. He later won a Junior national championship in Greco-Roman, and he placed seventh in Junior Freestyle.

After graduating from Mahomet-Seymour in 1998, Ryan received a scholarship to wrestle for IWCOA Hall of Fame coach Mark Johnson and the fighting Illini at the University of Illinois. During his collegiate career, he qualified for the NCAA championships at 149 lbs. and was ranked in the top 15 at 149 and 157 lbs. Ryan also won the University Nationals as a Junior in college. This qualified him to represent the USA in the 2001 Pan Am Championships in Santo Domingo, Dominican Republic where he placed fifth.

Ryan stopped competing in 2003. The skills he has acquired as a wrestler have caused him to be driven in his personal and professional life which has given him an appreciation for the sport beyond belief. Ryan has given back to the sport by volunteering his time as a coach while living in Virginia, Georgia, Florida, and California. Through either volunteering at the local high schools or starting up club teams, Ryan has coached wrestling in one capacity or another for the last 10 years. He misses the sport during the off times but has managed to be involved one way or another and is always looking for the next opportunity to positively influence others’ lives through wrestling.

Ryan has a deep gratitude for the sport and to the many influential people and the support system that has shaped him into the person he is today. Ryan currently lives in Rio Nido, CA about 1 hour north of San Francisco with his lovely girlfriend, Katie, and their sweet pit bull Bella.