After high school, Scott went on to Lincoln College to wrestle for another IWCOA Hall of Fame member, Rex Branum.  He was a member of Lincoln’s 1989 NJCAA National Championship team.

Scott began coaching at Providence Catholic and served as an assistant for Hall of Fame member Keith Healy.  During his eight-year tenure as an assistant, the Celtics claimed two 3rd place trophies and five IHSA Dual Team State Titles.

He then moved on to Coal City and served as an assistant to fellow Hall of Fame Inductee Mark Masters for two years.  He then assumed the head coaching position and posted a 45-25 record for three years.  Scott took the position of Head Wrestling Coach at Shepard High School in Palos Heights, a role he holds today.  At that time he worked closely with another IWCOA Hall of Fame member, Jim Craig.  During his sixteen years at Shepard he has notched 248 dual wins for a total of 292 dual meet wins.  He has coached fifty state qualifiers and thirty-five state place-winners with seven State Champions.

Scott served as an assistant coach for the National Dual Team, 4 times as Cadet Coach and two times as Junior Coach.  He has hosted the IWCOA F-S Sectional for 15 years as well as many youth tournaments for the past 12 years.

Scott currently team teaches in the Shepard Power PE program where general education students mentor their peers with disabilities in the physical education setting.  He participates in the Polar Plunge every year to raise money for Special Olympics-Illinois.

As member of the Ken Gerdes, III Foundation, Scott works to coordinate the annual golf outing to raise funds for Leadership Scholarships.

Scott also serves the IWCOA as a member of the Illinois/Indiana Classic Dual Committee. 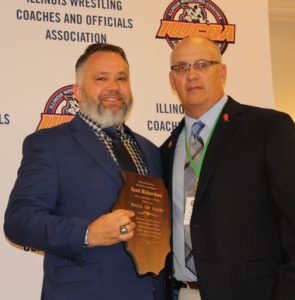