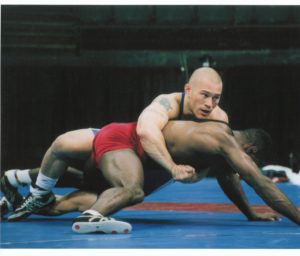 Sean is a product of Providence Catholic High School where he wrestled for IWCOA Hall of Famer Mike Polz. Sean’s scholastic accomplishments – 184 wins in 190 matches; finishing 3rd, 3rd and 1st in his respective sophomore, junior and senior seasons; earning All-American status three times as a Freestyle competitor at Jr. Nationals; and being named to the 1989 Asics “Dream Team” in his final scholastic year were but a hint of what was yet to come.

Wrestling for the University of Michigan, Sean won 125 bouts for the Blue and Maize. He was twice a Big Ten Champion and a three-time NCAA qualifier. Twice he earned All-American status with a 3rd place NCAA finish in 1993 and a 2nd place NCAA finish in 1994. In the 1993 NCAA tournament Sean lost but one match (which he later avenged with a victory in the third place bout) while earning the “Gregorian Award” for the most falls in the least amount of time. Along the way Sean managed to win the 1993 Midlands Championship. Additional collegiate honors include Team Captain in ’93 and ’94; the Wolverine’s Outstanding Wrestling Award in both ’93 and ’94 and the University of Michigan’s “Bob Uffer Award” (presented annually to the best senior athlete) in 1994.

Sean spent the first five years following his graduation from Michigan as the assistant coach at the University of Wisconsin. He followed that up with a one year stint as an assistant at his alma mater. During this period Sean had a hand in producing four Big Ten Champions, twelve NCAA All-Americans and two NCAA Champions.

In 2001 Sean brought his coaching expertise back to Illinois with the creation of his Overtime School of Wrestling. Since its inception individuals who have trained with Sean and his staff have accounted for 70 high school state medalists (44 of which have become State Champions); over 100 Cadet-Junior All-Americans (including 16 which were National Champions). Sean’s reputation as a coach has earned him membership on the USA National Coaching Staff, FILA’s Junior Men’s Freestyle World Team Staff (2005), United States Senior World Team Staff (2006), United States Freestyle World Cup Coach (2007), and NYAC Club Coach. In 2004 Sean was selected by USA Wrestling as the Developmental Coach of the Year and in 2006 USA named Sean as the Freestyle Coach of the Year. Most recently Sean was a finalist for the United States Olympic Coaching position.