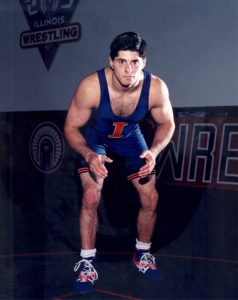 Steve is from Glenbrook North High School, where he placed second in the State. He also placed Fifth and Second in the Illinois Wrestling Federation State in Greco· Roman and 5th in Free Style. He was a Member of the Junior National Greco Roman Team.

His Collegiate Days were spent at the University of Illinois, whereas Team Captain he placed Four Times in the Big 101 Fifth, Third, Second and Second. He was Named Academic All Big 10 in 1993, 1994 and 1995. Steve also placed Three Times at the Midlands, Third, Second and Champion. Steve also qualified for the NCAA t s Four Times, Placing Three – Fourth, Fifth and Winning the Championship in 1995. He was also an All American Academic Team Member in 1994 and in 1995. He was also a GTE Academic All American in 1995.

Internationally, Steve has P1aced Fifth, Second and Champion in the USA Open Free Style. He has been on the World Team – an Alternate to Russia in 1997; Placed Third in Turkey in 1997; Placed Second in the Ukraine in 1998 and Did Not Place in Iran in 1998. Presently he is ranked Number l at 167 in the USA in Freestyle.