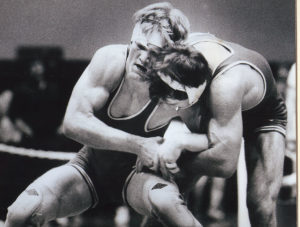 Born in Topeka, Kansas, Steve Steams attended Oak Lawn Community High School. He graduated in 1981. Steve was three-time state qualifier placing 6th in 1979·and 4th in 1980. His career record in high school was 107-17. He was a three-time freestyle state champ and three-time Greco-Roman state champ. He was Junior National runner-up in 1980 and National Champion in 1981.

Steve attended Southern Illinois University-Edwardsville and wrestled under Hall of Famer Larry Kristoff. He was a three time Division II All-American. He finished 3rd, in 1983 and 1985, and won the national title in 1986. He was a two-time place-winner at the Midlands. He was a member of three of SIU-E NCAA championship teams. In 1986, Steve was member of the East/West NCAA Division I All-Star Team. In 1986, Steve won the Outstanding Sportsmanship Award for all athletes at SIU-E.

Upon graduation from SIU-E, Steve started teaching and coaching at Oak Lawn Community High School. After five years, he assumed the head coach position at Reavis High School. In sixteen years as head coach, he has a dual meet record of 200-93. His teams have won three conference titles. He has coached forty state qualifiers and eleven state place-winners. Steve has been selected as SICA Assistant Coach of the Year and SICA Coach of the Year. He has served as President of the SICA Coaches Association twice.