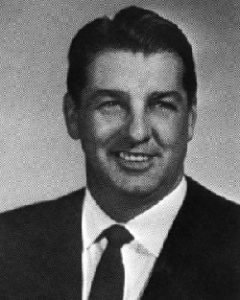 Ted is a graduate of Proviso East High School, where he wrestled under Hall of Famer Lou Slimmer. While in High School he won two Championships 1937 and 1938. He was the first 145 pound champion in Illinois, as the First Official State Championships were held in 1937 Ted went to the University of Illinois where he was a Two time Big 10 Champion and was twice an All American, placing 3rd and 2n d in the NCAA Division I Championships.

After graduation from Illinois, Ted started his teaching and coaching career at Granite City High School. In 1945 he moved to Phillip Exeter Academy in New Hampshire, where he coached and taught until his untimely death in 1980.

His teams won numerous individual titles and a number of Class A Academy Championships in the New England Area. For these accomplishments he was named Wrestling Man of the Year in New England Wrestling in 1984.