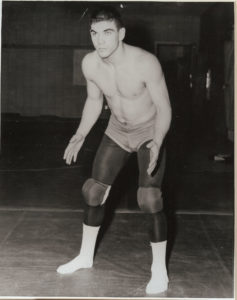 Terry was a Two Time State Champion at Oak Park High School in 1959 and in 1960. He moved here from Iowa where he placed 4th in the State as a freshman and 2nd as a sophomore. He was also an All State Quarter- Back at Oak Park.

His Collegiate days were spent at the United States Air Force Academy. His Wrestling Achievements were a Two Time Mountain Inter-Collegiate

Champion and a 3 Time All American in the NCAA Division I Tournaments. He Finished 2nd; 4th and 6th.

While at the Academy, Terry was the Varsity Quarterback for 3 years. Each year the team got better the longer the season, the shorter the wrestling season for conditioning.

Terry is presently a Colonel in the Air Force, attending the Air War College and I suspect close to becoming a General.