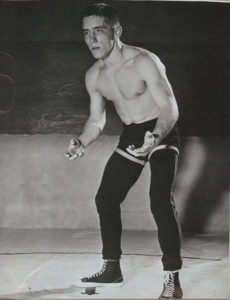 During his high school career, Terry finished 3rd at 105 in 1951 and won the State title at 112 in 1952. He entered the University of Iowa and under the tutelage of Dave McCuskey, Terry won big 10 titles in 1955 and 1956. Terry placed 3rd in the NCAA at 115 in 1954 and won National championships at 115 in 19.5.5 and 1956. Continuing with his wrestling development Terry went to Oklahoma where after four years of activity with the YMCA in Tulsa and with various academic pursuits, such as writing a book entitled “Championship Wrestling”, he got in shape for the 1960 Olympics. Terry won the 125.5 Olympic championship gold medal in

Rome. He is the first and only native gold medal winner from the State of Illinois in Wrestling.

Present1y, Terry is active in all phases of wrestling in Illinois. He is an executive

Vice President of the Wrestling Federation helps coach the Mayor Daley Wrestling team and is involved in many promotional aspects of wrestling.