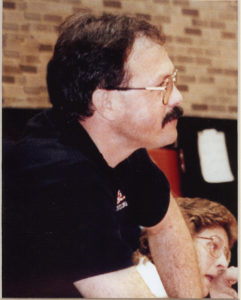 Terry McCoy was born in Peoria, IL. He attended Washington High School and graduated in 1964. He wrestled for Don Clayberg and was conference champion and team captain his senior year. He also lettered in football and track. He attended Western Illinois University and wrestled one year for Ted Mullins. While at WID he was president of the Phi Sigma Epsilon fraternity and a junior class officer in the student government.

Terry started his coaching career in 1969 as an assistant coach to Hall of Famer Jim Querciagrossa at Peoria Woodruff. The Woodruff team of 1972 set a new school record of 19-2. They won the school’s first ever Mid-State 8 Conference Championship and brought home a 2nd place trophy at the IHSA Sectional. Both were first for any Woodruff team. In 1973, Terry took the head wrestling job a newly started program at Kaneland High School in Maple Park, IL. During his eleven years at Kaneland, he also started the junior high and kids program. He coached fifteen state qualifiers, four of which were State Champions and three other place-winners. One of these State Champions was one of the first Class A wrestlers selected as a High School All-American. His 1976 team was 3rd in the state meet. He finished at Kaneland with 86 wins.

In 1984 Terry moved to DeKalb High School and became head of the guidance department and assistant coach to Hall of Famer Dan Cliffe. During his twelve years as varsity assistant, he helped coach the 1988 team to a 3rd place finish and the 1989 team to a 2nd place finish in the IHSA Dual Meet State Tournament. In 1989 he was selected IWCOA Assistant Coach of the Year. He and Dan also had five other teams qualify for the Dual Meet State Finals.

In 1990, Terry helped found the DeKalb Wrestling Club to promote wrestling at all age levels. He was a member for sixteen years, serving as President the last five years.

In 1996, Terry became only the 4th Head Coach in DeKalb history, following three Hall of Famers; Don Flavin, Wayne Miller, and Dan Cliffe. During his four years as Head Coach, his teams won two Upstate 8 Conference titles, two IHSA Regional Championships and one IHSA Sectional Championship. He also coached two State Champions, both of whom became High School All-Americans. He had four other place­ winners and several state qualifiers. He retired in 2001 with a 64-16 record and thirty­ three total years in coaching wrestling and football.

He is now retired in Cleveland, TN, enjoying watching wrestling, golfing and fishing