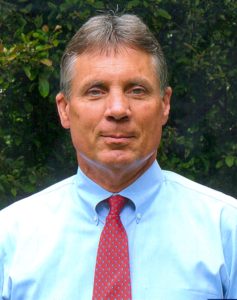 A four-year three-sport (cross country, wrestling and track) letter winner at Dubuque Senior High School in Dubuque, Iowa, Tim went on to wrestle for Augustana College in Rock Island, Illinois. He won the CCIW Conference Wrestling Tourney twice and an All-American in both 1969 and 1970 when he place 5th and 3rd respectively at 167 lbs. Additionally, Tim was selected as the Viking’s Captain for both his Junior and Senior seasons. In his senior season he was awarded the “Knut Ericson Award” for the senior athlete with the highest GPA. Tim graduated from Augustana with a Bachelor of Arts degree in Psychology – along with a 3.4 GPA. He earned his Masters degree from Western Illinois University in 1976.

In 1972 through 1975 Tim served as the Head Wrestling Coach for the Augustana Vikings. His teams won conference championships in 1972, 1974 and again in 1975. Additionally, his squads produced twenty-one NCAA qualifiers along with three NCAA All-Americans.

Beginning with the 1992 Tim entered the realm of wrestling official. Since his immersion as a wrestling official Tim has worked numerous duals and tournaments including five IESA State Finals; sixteen IHSA Regionals; thirteen IHSA Sectionals; and ten IHSA State Finals. He has also served on the IHSA Wrestling Advisory Board (2003-2006) as well as an IHSA Wrestling Rules Interpreter since 2005.

In recognition of his success as an official Tim was named the Offical-of-the-Year by the IWCOA in 2002. He was cited by S.I.C.A. at its Official-of the-Year during the 2003-2004 season. Finally, in 2006 Tim was honored by the NFHS as their selection as Official-of-the-Year.

For his numerous accomplishments Tim is an honoree in both the Dubuque Senior High and Augustana College Hall of Fame.

He currently serves as the President of College and Applied Marketing Technologies, Inc and resides in Lindenhurst with his wife Cherie and their two children, Kelley and Nathan.