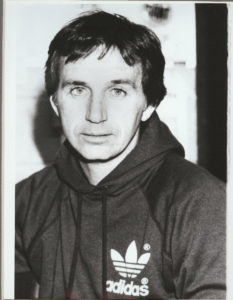 Tom is from Evergreen Park High school where he placed 3rd in the State at 112 in 1960 and third at 120 in 1961. His collegiate wrestling was done at the University of Pittsburg where he was nationally ranked.

His coaching career began at Lockport Central High School where he was an assistant for six years. He came to Oak Lawn Richards High School in 1972 and has been there since. During his coaching career at Oak Lawn Richards, his teams have won 6 SECA North Team Championships; 5 Districts; 4 Sectional plus Two State Championships in 1975 and 1977; His teams also finished 2nd in the State in 1976; 3rd in 1978; 6th in 1979 and 4th in 1980. He has had 20 individual place winners during this time of which 5 were State Champions. He has also won numerous dual meets.

Tom has been President of the SECA Conference for two terms; and has been on their board of directors since 1976. He is currently a member of the State Advisory Board. He was a Coach along with Chuck Farina, George Girard and Charlie Anderson of the First and Only All Star Meet in Illinois.

Tom has been very involved with the Illinois Wrestling Federation having been a Federation District Chairman since 1976; been involved directly as a team leader to the Federation Nationals; Has been the Head Greco Roman Coach and Assistant Free Style Coach; He has participated in two cultural exchange trips as the Head Coach; He has officiated the Nationals in Iowa City numerous times, both Greco and Free Style.