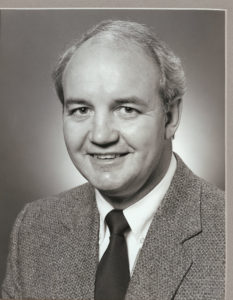 Tom’s career as encompassed all phases of wrestling. He began his career at Oswego High School where besides being on the Honor Roll and belonging to a number of activities, he won 13 Varsity Letters in Football, Baseball an d Wrestling. He captined all three squads. He was All Conference 3 times in Baseball, twice in Football and 2 times in Wrestling. As a senior he was little All State in Football and a two time qualifier for State in Wrestling. For this he received the Senior Sportsmanship Award. His Wrestling was under Hall of Famer Ken Pickerell.

His Collegiate career was at Wheaton College, under Hall of Famer George Olson again he was involved in numerous activities among which was winning 4 letter in Football and 4 in Wrestling. As a Wrestler he had a 91-6 record, winning the Wheaton Tournament 4 times, twice being named the outstanding wrestler. He Captained the Wrestling team in his Junior and Senior years. He was a Two Time All American; Winning the National Title as a sophomore in 1963 and because of a broken nose, finished 4th as a junior. Illness prevented him from going as a senior.

Leaving coaching temporarily to work on advanced degree, a degree he receiver from Ball State University and to be involved in the private sector, took two years, but in 1969 he received an offer from Taylor University in Indiana Tom Coached and taught at Taylor for 10 years; during that time his teams Won 128-lost 22; Won 7 Hoosier-Buckeye Conference Championships; He had 3 runner-up teams. He coached 13 All Americans, with 1 of them being a National Champion. Taylor University finished in the top 10 in the NAIA for 4 straight years.

While at Taylor, Tom was involved in numerous activities associated with that school at the National level.

Tom came to Northwestern University in 1979 as the Head Coach. His teams now involved in the highly competitive Big 10 have still managed to win over 100 dual meets in these 9 years. He has had numerous Big 10 place winners, with 4 Division I All Americans.

He has co-authored a Book “Wrestling for Beginners” with Redd Handley.