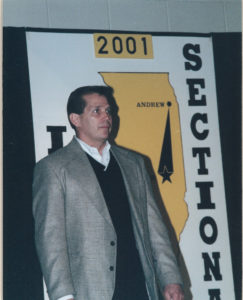 Tom Lahey began wrestling at Stagg High School where he was a regional champion. He then wrestled at the University of Dubuque for two years and played football for four years.

Tom served as a wrestling coach for five years at Orland Junior High School from 1973-1977. He was an assistant at Andrew High School in Tinley Park for two years (1977-1980) before assuming the role of Head Wrestling Coach in 1980. Throughout twenty years as head coach, he has amassed a dual meet record of 270-106-2. His teams have won seven SICA Conference titles and six I.H.S.A. Regional Championships. He has coached forty-six State Qualifiers, producing nineteen state place winners. He has had five State Champions (including Illinois’ first four-time Class AA State Champion).

He has served as president, vice-president, secretary and treasurer of the SICA Wrestling Coaches Association. Tom has also worked as a wrestling official and was selected by the SICA as Official of the Year.