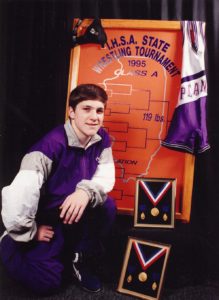 Tom wrestled four years under the tutelage of Hall of Fame coach Joe Cliffe at Plano High School. During his tenure in the Reaper program Tom won 131 matches and lost only 14. He was a four-time First Team all I-8 Conference selection as well as the I-8’s Wrestler-of-the-Year three times. Wrestling at 103 lbs. in 1994, Tom’s sophomore year, he was crowned State Champion as he defeated his Coal City opponent. The following year Tom moved up two weight classes to 119 lbs. and claimed his second title. In his senior season Tom bumped up to 125 lbs. and proceeded to capture his third State Title. Plano High School has a rich wrestling tradition and has seen eleven of it wrestlers produce sixteen individual titles since 1986 – Tom LeCuyer was the first and only Plano wrestler to win three consecutive State Wrestling Championships.

In recognition of his accomplishments on the mat, Tom was selected as the IWCOA’s Outstanding Wrestling in 1996. Wrestling USA magazine named Tom to its All-American Team in the same year.

His career path took him to Northern Illinois University in Dekalb where he wrestled for Coach Dave Grant. In 1998 Tom earned Greco-Roman All-American status as an Espoir. 2000 saw Tom qualify for the NCAA Championships in St. Louis. Ironically, Tom lost a close opening match to another Illinois standout wrestling for Arizona State – David Douglas, himself a four-time Illinois State Champion. Tom went on to win his next two matches before he was eliminated from the tournament.

Graduating from NIU in 2001, Tom has been employed at LeCuyer Painting and Decorating, Inc. However, like so many others, Tom has sought to give back to this sport of wrestling. He volunteered as an assistant coach at Waubonsee Community College for the 2000-2001 season. Moving to Plano High School as an assistant for the 2002-2003 season allowed Tom the opportunity to have a hand in the making of Plano’s second three-time State Champion, Ruben Villarreal. For the 2003-2004 season Tom was the Head Coach at Plano High School.