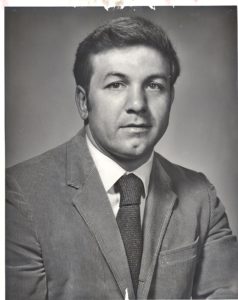 Tom b-began his wrestling career at Thornton High School under the guidance of Ted Czech, himself a Hall of Famer. While at Thornton, Tom Was a State qualifier on a State Championship Team. He enrolled at the University of Illinois, but later transferred to Indiana State University where he became a Two Time All American, placing 5th twice in the NAIA Championships. He began his coaching career in the Arlington District as an assistant for Four years, moving to Hersey as the Head Coach when that school opened. During his career at Hersey, he had 8 State Place winners, three of them Champions. His teams won the Conference Championships Three Times; The District three Times and the State Champion ships Twice, in 1971 and in 1972. He was named Coach of the Year in 1971.

During his early Coaching Days, he wrestled for the Mayor Daley Wrestling Club.

He left Hersey High School to become the Head Coach at the University of Illinois in 1973 a position he retained for five years. During this time he was an assistant in football for Three years. During this time he had nine National Qualifiers. He left this coaching position to become an Assistant Director of Athletics in Charge of Sales, Promotions and Summer Camps, a position he still retains.