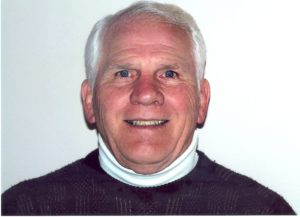 Born in Winona, Minnesota in 1938, Tom Seeman grew up on a near by dairy farm. In 1954 his family moved to Crystal Lake, IL. He competed in junior varsity sports his junior year in high school at Crystal Lake High School. During his senior year, Tom made All-Conference in three sports. He was and All-Conference tackle in football and the heavy weight conference champion in wrestling. Tom won the shop put and placed 2nd in the discus throw in the conference track meet. He was voted Crystal Lake’s Athlete of the Year and he ranked 8th in a class of 163 students.

Tom was recruited heavily by Northern Illinois University and chose to become a Huskie upon high school graduation. He went to NIU on a full football scholarship. His line coach, Bob Brigham, also the head wrestling coach at NIU, convinced Tom to wrestle as well. That resulted in eight varsity letters from NIU, four in football and four in wrestling. In Tom’s senior year at NIU, he was an NAIA All-American wrestler, placing 3rd in the National Tournament.

For ten years, Tom hosted a state-wide, post-season takedown tournament. As many as 700 participants per year competed in this event. Tom wrote numerous articles for “The Word”, the IWCOA newspaper that at that time was edited by Dennis Hastert.

Tom is a lifetime member of the IWOA. He enjoys many volunteer activities. These activities include the Food Pantry, PADS for the homeless, church outreach programs, and weeklong work tours to the Ogallala Indian Reservation and ASP (Appalachia Service Project) in the Virginia mountains.

Now retired, Tom enjoys watching children of friends, family, and former wrestler compete in various sports. Other spare time is spent traveling. Tom and Carol, his wife of 48 years, have visited all 50 states in the United States and all seven continents of the world. As Tom says, “Life is just beginning”.