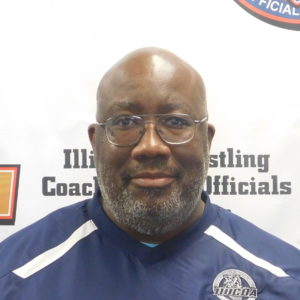 Born in Chicago, IL, Tony Clarke began his high school wrestling in North Chicago. He wrestled for three years under Hall of Famer Amos Jones. He also lettered in Cross-County and Track. He graduated from Waukegan West High School in 1982 and was a sectional qualifier.

Tony began working for the Department of Defense at Great Lakes Naval Base in 1984 until the present time. He coached two years with the North Chicago Wrestling Club and eight years with the Hawkeye wrestling Club. During that time, he led numerous teams to regional and sectional titles and had two IKWF State Champions and several place winners. He then coached for two years with the Corsairs Wrestling Club and four years at Lake Bluff Junior High School. During that time he coached an IWF State Champ and an IESA State Champ. He has worked as that freshman coach for the past two years at Carmel High School in Mundelein under another Hall of Famer, Joe Scordino.