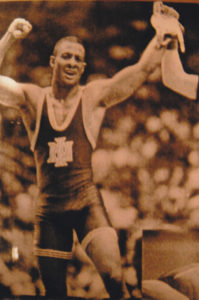 Tony Davis began his wrestling career as a Harvey Twister and was Illiniois’s first 5 time IKWF State Champion. He wrestled for Hall of Fame coach Quintroy Harrell with the Twisters. He attended Mt. Carmel High School in Chicago, wrestling for another Hall of Famer Bill Weick. He had a two year high school record of 65-1, winning the state title at 125 lbs. in 1994 and placing second in 1995. He also boxed in high school, winning the Golden Glove title as a freshman.

After high school, Tony went on to Iowa Central Community College in Fort Dodge, IA and won two junior college National Championships. He then went to the University of Northern Iowa in Cedar Falls, IA where he was a Division I NCAA Champion and runner-up and had a record of 136-6. He was selected as UNI’s Senior Athlete of the Year and earned his BA in Physical Education.

Tony was a member of the Real Pro Wrestling squad. He placed 3rd in the 2003 world team trials and finished 4th place at the 2004 Olympic team trials. He was a two time US Open place winner.

He began his coaching career at the University of Nebraska and the moved on to East Chicago High School in Indiana and then to North Carolina State University. He currently teaches Physical Education at Spring Valley Elementary School in Raleigh, NC. He was named Teacher of the Year for Durham County Public Schools for the 2010-2011 school year.

Tony was inducted to the University of Northern Iowa Hall of Fame. He is the creator of the Shoot Fast-Shoot First Wrestling systems. www.tonydaviswrestling.com.

His hobbies include wrestling, coaching and spending time with family.