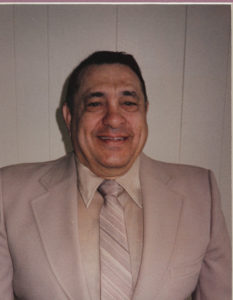 Tony began his wrestling career at the Community High School of Sterling, a forerunner to the present Sterling Newman Catholic High School. His Collegiate career was at Illinois State University, where he was All Conference for the Late Dr. Eugene Hill a Hall of Famer.

His teaching career began 35 years ago and included stints at Iliopolis, Metamora, a Junior High and the last 27 years at Rock Falls. He coached at Rock Falls for 2 years, but devoted his time and energies to becoming one of the best know officials in the Northwest part of Illinois. This year is his Official Retirement year as an active official, a span covering 28 years..

During his 28 years as the man with the whistle he worked over 10 Regional: and Sectionals and had the honor of participating in 8 State Finals. He also has worked all 5 years of Dual Sectionals and Dual States. This year was quite memorable for Tony as he and his son Tom worked a Sectional together after having worked a Regional together last year. This is probably a first in Illinois history.

Tony has been instrumental in the running of Clinics for Officials and Coaches in Northwest Illinois for the past 25 years, including those now sponsored by the IWCOA.