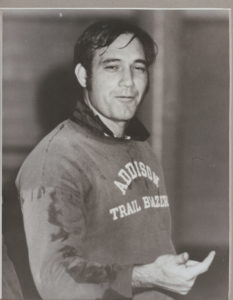 Tony began his career in Rome, New York; His Collegiate work was at Cortland State in New York.

He began his coaching career at Addison Trail High School, when it first opened and has been their Varsity Wrestling Coach for the past 19 years.

His record at Addison Trail has been 213 wins; 83 losses and 6 ties; they have won 3 Des Plaines Valley Championships; 7 Regionals; 4 Sectionals. They have had numerous Conference and Regional Champions; 39 of his wrestlers have qualified for State Finals; with 17 of them placing, 6 have been Champions.

Tony has been active in the IWCOA, holding the office of President in the year 1979-1980.

He also has served on the State Wrestling Advisory Board for 3 years and was very instrumental in getting the present 3 qualifiers from the Sectional to the State initiated.