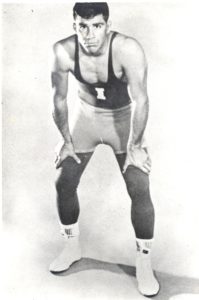 Vic placed second in the State at Re8vis in 1962 and won the State Championship in 1963. His Collegiate Wrestling was done at Iowa State University where he was a Three Time Big Eight Place winner, twice the Champion. In the NCAA’s he was a Three Time Place winner; placing third; second and in 1967 he won it all. Vic was also a Two Time Midlands Place winner and a United States Wrestling Federation Champion. Injury cut short his career as a Wrestler. He coached for a number of yea.rs at Iowa State University, Iowa University and Temple University before going into private business. Vic wrestled in High School for John Fitzgerald, who is also a Hall of Fame Member.