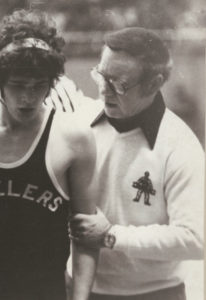 Walt began his wrestling career at Granite City, under the direction of Hall of Famer Bill Schmitt. While in High School he was a two time State qualifier. His collegiate days started at Arkansas State where he stayed for two years before entering the service for 4 years. Upon getting out of the Armed forces, Arkansas State had dropped their program, so he entered Southern Illinois University at Carbondale, where he wrestled for the late Jim Wilkenson, also a Hall of Famer. After graduation he went to Cahokia as the Head Coach where he had 2 State qualifiers and 1 place winner. He left Cahokia to become the assistant at Granite City, a position he kept for 10 years. When Granite City North opened he became their Head Coach for the next 10 years until North merged back with South. During this time his North Teams won 217 -34-4, had 6 Place winners, 1 which was a Champion. They won 3 Regionals; 1 Sectional and had 44 State qualifiers. He coached what is now the Belleville Community College for years, where he had 3 College All Americans.

During this time, he was involved in the Granite City Park District and various Kids programs – Helped coach the Summer Freestyle National Team in 1978. He was the NCAA Executive Committee Vice President for High Schools for 4 years. He was awarded the 25 year membership Award by the NCAA. He has been named an Honorary Life Member of the National Wrestling Coaches Association.

For all of his achievements in the local area, Walt has been elected to the Granite City Hall of Fame.

Walt is presently Principal of an elementary school in Granite City.