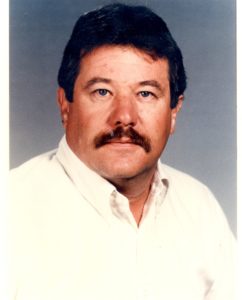 Wayne began his wrestling at Peoria Woodruff High School and in his junior year transferred to Peoria Richwoods.

His collegiate days were spent at Monmouth.

His coaching began at Mount Vernon, Iowa where he spent 3 years moving onto Lewis Central at Council Bluff, Iowa for one year, then Indianola, Iowa for 3 years and then back home to Illinois in 1970 at Urbana where he was the head coach from 1970-1990 a total of 21 years in Illinois, 28 years total.

His overall win loss record stands at over 315 wins. He has had 9 State Place winners, of which two were champions. Both of his sons were wrestlers for him and both have become collegiate wrestlers, Mark at Illinois State and Kirk at Oklahoma State, where he become a two-time All-American.

Wayne has been active in the Urbana area for both the IWCOA and the IWF, being the Decatur Regional Representative for 5 years.

He has helped at the University of Illinois Summer Camps, the Illinois National Free Style Training Camp, and the Prairie State Games. He was also an assistant coach on the champ builders 1987 European Cultural Exchange tour.