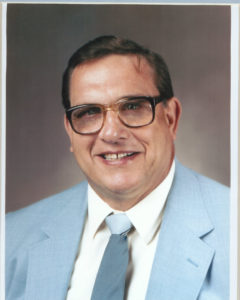 Bill is a graduate of Chicago Amundsen High School, where he began his wrestling career. He enrolled at Illinois Wesleyan University where they did not have wrestling at the time. However, Bill was the Intramural Champion there and through his efforts in developing the Intramural program, Intercollegiate wrestling began.

His coaching career began at Wauconda High school, where he has a 40-22-1 dual meet record, with 1 State place winner, a time span of 4 years. He then moved to East Leyden High School as an assistant and over a span of 7 years his lower level teams won 105 and lost only 17.

His coaching career ended as he moved into Administrative duties, but his involvement in wrestling did not.

As an official, he worked on the mats for 13 years, which included 5 Regional and 3 Sectionals.

As an IHSA Tournament Manager, he has been involved in organizing 15 Regional Tournaments and 14 Sectionals. He also originated and managed the Leyden Invitational which is now 13 years old.