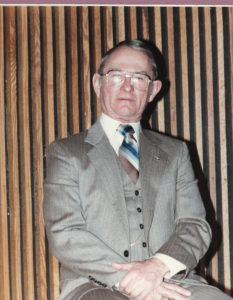 Billy Man n has been involved in Wrestling in Illinois since before 1940. He has been an Official for 23 years. During that time of officiating he worked 16 Regionals; 16 Sectionals and 7 State Finals. He has been a Rules Interpreter for many years and an Official Clinician. He has also authored many articles pertaining to Officiating and to Wrestling Techniques. He has also officiated many Collegiate matches of one kind or another.

As a wrestler, Billy placed in the State for Danville High School and at the University of Illinois where he was Captain be placed in the Big 10 and finished Second in the NCAA Division I at 114.5 weight class. He also finished high in the Olympic Trials, but did not make the team.

He has coached at the lower levels at Maine East High School and now at Maine South High School. He also had a coaching stint at the University of Illinois at Navy Pier. During his time at Navy Pier he helped sponsor the City of Chicago Public High School Tournament, which was held at Navy Pier.