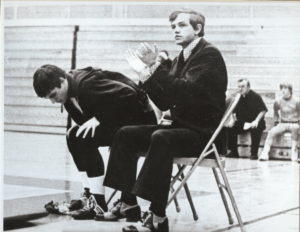 Born in Chicago, Bill Murphy attended Marian Catholic High School in Chicago Heights. He was a graduate of the Class of 1965. As a college wrestler at St. Joseph’s College in Collegeville, IN he was a three years varsity starter and captain his junior and senior year. He placed twice in the Indiana Collegiate Conference.

In 1977 Bill went to Reavis High School and served as an assistant varsity coach and head sophomore coach before going to Lisle High School in 1980. During his one season at Lisle he had a dual meet record of 10-8-1 and had one state qualifier and place-winner.

As head coach at Homewood-Flossmoor, Bill had a dual meet record of 234-218-8. His career record was 310-264-14. His H-F teams won two regional titles and one SICA East championship. He had eighteen state qualifiers and six state place-winners. In 1986 he founded and became the first coach of H-F IKWF Kids Wrestling Program.

Bill has hosted dozens of IWF Freestyle and summer tournaments and has worked as an announcer, referee, judge, and weigh-in official. He served on the committee for the realignment of the SICA Conference and was historian and recorder from 1986-2003. As an officer of the SICA Coaches Association, Bill has served as President, Treasurer, and Representative.

Bill was selected by the SICA Coaches Association as Coach of the Year in 1995, 1996, and 2001 and in 1995 was nominated as I.W.C.O.A. Coach of the Year. In 2003 the SICA Wrestling Coaches presented Bill with a Special Recognition Award. He received the Lifetime Service Award from the Cook County State’s Attorney Office in 1999.