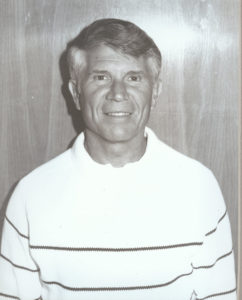 Bill began his career at Oregon, Illinois. They did not have Wrestling at this school. Bill was a football player and track star. His High School coach was Hall of Famer Murney Lazier.

After High School, Bill enlisted in the United States Navy, where he served 4 years. He played football for a Naval Unit in Hawaii during this time. When his enlistment was up, Bill enrolled at Northern Illinois University. Although his expertise at this time was in Track – He was a polevaulter – He held the Northern Illinois Pole Vault Record for a number of years – An activity he frequently demonstrates to high school vaulters – he did get interested in the Wrestling Program and began to participate.

His teaching career began at Reavis High School, where he was the Sophomore Coach for Hall of Famer John Fitzgerald. Two years later found him as the Varsity Coach at Downers Grove North High School, a position he held until his retirement from coaching – a total of 27 years.

While at Downers Grove North, his teams have won over 275 dual meets, a number of tournaments, which include 4 Regionals; and to sectional runner­up positions. His teams have placed high in the highly regarded Palatine tournament o His teams also won 6 West Duburban Conference Championships, which were based on dual meets.

He has coached 10 State Place winners, two which were State Champions.

He has coached a number of men who have gone on to become Wrestling Coaches themselves, both High School and College.

Bill is well known for his personal philosophies, which I quote here:

Make the best of the situation

Live each moment to the fullest

never dwell on the past or live for the future

all I ask is that you do your best

don’t worry about what other people think, just be your own person and

do your own thing