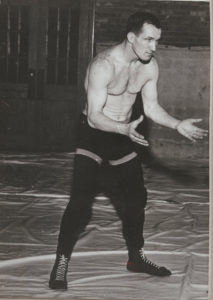 Bill is a graduate of Tilden Tech and of Iowa State Teachers College (now known as the University of Northern Iowa).

Bill was voted into the Helms Foundation Hall of Fame in 1970 for his work in coaching and guiding the 1969 Junior Olympic Team to a world Championship.

This past year found Bill engaged in helping the U.S. Olympic capacity that he could.