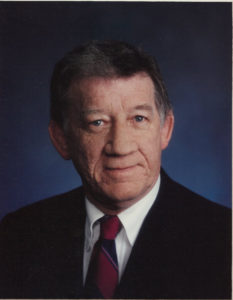 Bill started his wrestling career at Thornton Harvey with Jack Robinson a Hall of Famer as his coach. While competing there, he was a two-time state qualifier.

Upon completion of his Master’s Degree, Bill accepted a teaching-coaching position at Naperville Central High School in 1960. He assisted for 2 years and during that time Naperville Central has 7 State Qualifiers and 2 Place winners. Taking over in 1962, he developed 18 State Qualifiers, 8 Place winners, one who was a Champion. He gave up the Head Coaching position in 1978 and became involved in Administration. His teams throughout these years have won over 200 dual meets, the UpState Conference Championship, 3 Regional, placed 2nd in the two Sectionals and won one.

Bill got back into wrestling serving as an assistant 3 years ago and is still the Dean of Boys at Naperville Central.