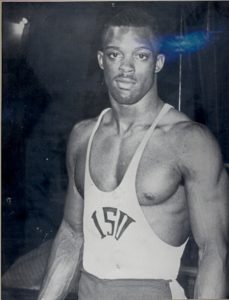 Willie is being recognized as a wrestler, he began his career at Bloom Township High School. His college career was completed at Illinois State University where he, besides winning numerous invitation tournaments, placed 2nd in the NAIA in 1965, won the NCAA Division 2 National Championship in 1967 and placed 5th in the Division I NCAA Championships. His wrestling prowess began to take shape after college when he began working in the National Federation Tournaments. He has been a National Free Style Champion, and 7 times he has been the National Federation Greco-Roman Champion. He won and placed in a number of open tournaments during his career, among them twice 3rd in the Midlands, 6th twice in the World Championships in Greco-Roman and winning a place 5 times on the World Teams. In 1972 and 1976, he was an alternate to the Olympic Teams. He coached at Hillcrest, where he had state qualifiers each year.