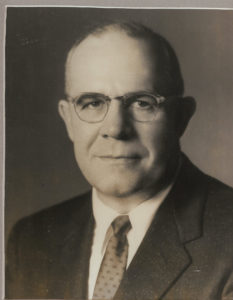 Wirt began his career, graduating from Columbia High School in Missouri and then from Kirksville State Teachers, also in Missouri. He came to East St. Louis High School out of college. He started the wrestling program in 1934 and it flourished until 1944. During that time his teams won 10 South Western Conference Championships, qualified many for State competition, of which 18 were place winners. That included 6 State Champions. Familiar names in that group would be future Big 10 wrestlers: Joe Garcia and Chuck Gottfries. In 1944, wrestling ceased, due to the unavailability of meets, but when it began again, Mr. Dowing, then the Principal fo the High School was very instrumental in the process. During his 38 years on the staff at East St. Louis High School, Mr. Downing was involved in the football and track program, Dean of boys, and Principal. He is also a member of the Illinois Football Hall of Fame. Turned down Grand Marshal in 1990 due to age and illness.